Councillors have today agreed to the principle of housing on the former Kirkstall District Centre site.

Initial proposals for 302 properties on the mostly derelict site were discussed for the first time by members of the council’s City Plans Panel at a pre-application hearing at the Civic Hall this afternoon.

Members were receptive to the number of properties on the site, despite it being earmarked in council planning policy for a mix of offices, retail and residential. 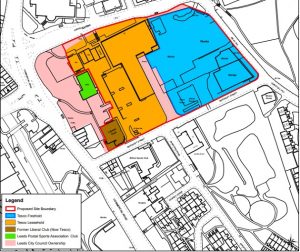 Councillors were commenting and providing guidance on the emerging scheme ahead of a full planning application being submitted in March 2019, so no formal decisions were taken today. But they warned that the site was a difficult one to develop because of its slope and traffic congestion in the area.

Artisan proposes a series of three and four-storey residential apartment blocks, with parking provided below ground level, and two-storey townhouses.

A proposed commercial unit could be housed at the corner of Kirkstall Hill/Kirkstall Lane and could be retail, a café/restaurant, a bar or potentially a co-working space. The site would also include three entrances onto Beecroft Street, semi-private courtyard gardens, a green buffer at the side of the site, terraced gardens and a small park area at the top of the site.

A spokesman for the developers said the plans were still a work in progress and not finalised. He said:

“This isn’t a city centre development. We’re aiming to encompass what Kirkstall is all about, It should blend in with what’s around it and become an integral part of the community.”

Kirkstall councillor John Illingworth (Lab) also spoke at the meeting. He broadly welcomed the proposals for the sustainable development of the derelict town centre site, while acknowledging some concerns raised by residents.

These included the small proportion of affordable housing units, concerns about the four-storey apartment blocks and limited on-street parking that could lead to parking on nearby residential streets. Cllr Illingworth added:

“Traffic generation will be significant, although less than convenience retail. The local network is already gridlocked at peak times and may not handle both the Artisan development and the 25% uplift expected from the Kirkstall Forge development.”

He said he was looking forward to a possible signalisation of Beecroft Street, an off-road active travel route towards Headingley as well as off-site greenspace contributions such as footpaths and bridges in the Kirkstall Valley.

“Please get on with it. This site has been fallow for at least 15 years, let’s see some progress please.”

Cllr McKenna questioned whether the number of parking spaces – 351 – was too high for the site and called for electric car charging points and a cycle lane along Kirkstall Lane towards Headingley.

“This is a tricky site which has been up for discussions since I became chair of Plans West back in 2004. In that time we have looked at a number of possibilities and nothing much has happened.

“This scheme does seem to be the most practical solution so far. Big retail schemes just don’t work on sites like this. It’s a strange site which dips so there are a wide range of issues the developer needs to address.

“I welcome the undercroft parking because of this. I don’t want parking to leak out of the area, so it’s important that the site have adequate parking. There will need to be come sort of road management scheme negotiated with Highways.”

Cllr Peter Carlill (Lab, Farsley & Calverley) added his support for residential properties on the site but asked whether some small independent businesses could be incorporated.

“We cannot underplay the frequent problems with traffic. I am pleased with residential, but you [Artisan] will need to look at Kirkstall Hill and Kirkstall Way in terms of highways, the existing stresses on those roads and the air quality.”

Councillors were asked to answer two questions at today’s pre-application hearing. They agreed the town centre site could be used as mainly residential and that the housing mix of 266 apartments and 36 town houses was in the right area.

Developers Artisan were asked to take on board the points councillors had made at the pre-application hearing and incorporate them into a full planning application for the council to formally consider.

Members of the public will be able to comment on the application once it’s been submitted, probably in March.

A council report considered by councillors today can be read in full here.

The report recommends works to improve access will be required on the already congested A65 Commercial Road at Beecroft Street, Savins Mill Way and Kirkstall Lane.

Artisan are holding a second public consultation event on Tuesday, 5th February from 3pm to 8pm at the Milford Marlins RL Club in Beecroft Street.

This will give residents in Kirkstall and Burley the opportunity to see the proposals in more detail and help shape what is built.

Artisan, based in the Isle of Man, held a public meeting in Kirkstall in November about the potential they see in the site, their possible solutions for transport links and engineering and about their other developments.