Don’t be in Kirkstall around Hallowe’en if you’re of a nervous disposition! Fans of horror movies are in for a real fright fest at Kirkstall Abbey at a series of special spooky events. 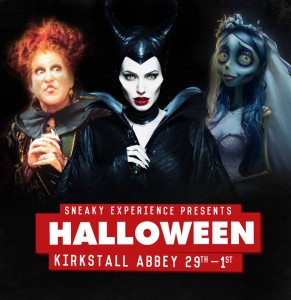 Outdoor cinema specialists Sneaky Experience are providing events for both young and old in the atmospheric setting of the 12th century abbey.

Director Wes Craven’s original Nightmare on Elm Street kicks off the long weekend of spooky goings on for grown ups, followed by Hitchcock classic Psycho, a secret film to be announced and make sure you stick to the road as An American Werewolf in London bites into Kirkstall.

Spooky films for children include Malificent, Hocus Pocus and The Corpse Bride.

All films include a live, interactive board game, where you are the board pieces. Roll the dice to see where the path takes you. Follow the route, complete the challenges and follow the clues.

Who knows who you may meet, will it be Maleficent or perhaps another favourite character? Whichever way the path takes you, organisers say it will be lots of fun for kids and parents alike.

Sneaky Experience also ran the popular Alice in Wonderland event at Kirkstall Abbey during the summer.

Films screen from Thursday, October 29 to Sunday, November 1. Tickets from £5 are available here.