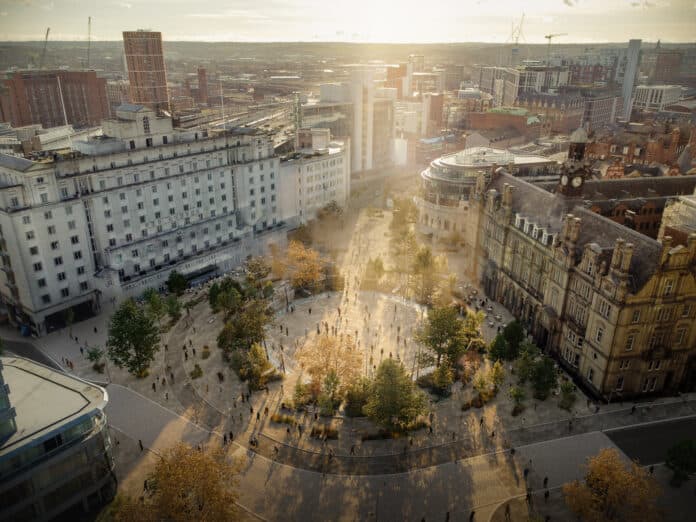 A group of Leeds historians – including a former Leeds West MP – has demanded assurances that no statues will be removed from Leeds’ City Square.

In a letter to the city council, nine local historians, including an ex MP and the former head of Leeds Civic Trust, say the Grade II-listed structures are vital to the city’s heritage.

Leeds City Council insisted there were “currently no plans” to move the City Square statues, which most famously include that of the 14th century knight Edward the Black Prince, son of Edward III.

Initial concept designs showing how City Square may look following a future revamp were released by the council in 2021, in which none of the statues were visible from the air.

However, that revamp is now on hold due to a shortage of cash and the local authority has stressed they were not final proposals in any case.

If it is revived in future, the scheme would be subject to consultations and the planning process before being signed off.

The City Square roadworks scheme, which is a separate ongoing project to pedestrianise the area, will be completed after Christmas. The local authority insists the statues won’t be moved while those works are completed either.

But in their letter, the group of historians said: “Any proposal to remove the statuary from the City Square would be met by considerable opposition from Leeds citizens, who have for 120 years regarded the statuary as being integral to the Square through the many changes in the Square and its surroundings.

“Each of the statues is individually a Grade II listed monument. And those listings associate each of them with the Square itself.

“We wish to place on record our opposition to any proposal to move the statuary and to state that we shall take steps to ensure that they are retained in their historic location.”

The Black Prince statue was unveiled in 1903, having been commissioned in the late 19th century by then Leeds mayor Thomas Harding.

Around the Square’s perimeter are eight female figures – commonly referred to as nymphs – holding lamps.

In their letter, the historians added: “There have been suggestions that the nymphs objectivise women. These statues were created by Alfred Drury, a leading English sculptor, as lantern holding nymphs.

“They are certainly not naturalistic representations of women and it is difficult to perceive them as other than the works of art that they manifestly are.

“We are all published local historians, members of established Leeds local history organisations, and we ask for your assurance that the statues and City Square will remain together as they were planned and installed 120 years ago as they are today.”

Signatories of the letter included Dr Kevin Grady, the former director of the Leeds Civic Trust and former councillor Michael Meadowcroft, who was the Liberal MP for Leeds West from 1983 to 1987 and who lives in Bramley.

Author Eveleigh Bradford and former university lecturer Janet Douglas were also among the number, as was the local architectural historian Dr Christopher Webster.

In response, a spokesperson for the council said: “There are currently no plans to move the statues in City Square, and they will not be moved during or due to the ongoing works in the vicinity.

“An initial concept to improve City Square’s public realm was developed in consultation with stakeholders through a design competition and selected for further development.

“However, a more detailed design is yet to be produced and there is currently no funding for the delivery of a scheme. It is therefore premature to consider design proposals at this stage for a scheme that has not been finalised and is unfunded.”

The council added that if funding was secured for the project in future, it was “committed to further consultation with all stakeholders on more detailed proposals”.