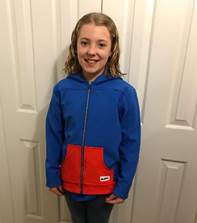 Girlguides in Pudsey and Farsley are doing their bit to celebrate Children in Need’s 40th birthday.

Girlguiding, the leading charity for girls and young women in the UK and BBC Children in Need have come together to celebrate Pudsey’s 40th year with the launch of a new fundraising challenge called ‘Act Your Age’.

Girlguiding has been encouraging its nearly half-a-million members to take their age and do something good with it to raise important funds and has also launched a special Pudsey badge.

Molly, 13, is a member of the 4th Pudsey Guides, and is walking 13km with her family for their Act Your Age challenge. Molly said:

“I’ve chosen to do a 13 Km walk because I love being outdoors and exploring. I love guides because I like having fun with my friends and facing new and exciting challenges every week.”

The leaders of the 1st Farsley Guides, one of the first Girlguiding units to open in 1910, are also taking on the challenge and will be walking 110km between them.

Talking about her own guiding experience, Maisie, a member of the 1st Farsley Guides, said:

“Being in Guides has helped me meet new people and have the best experiences. I have been to the Big Gig in London and guide camps where I have met thousands of other girls and have done loads of activities.

“The activities have allowed me to learn about myself and others in the world. Having grown up in guides, the leaders have always been there to listen and cheer me up when I’m having a bad day or give me advice on my future.

“They’ve helped me through highs and lows, and I wouldn’t change it for the world.”

The Pudsey badge has been designed to represent both charities and their mission and commitment to supporting children and young people in the UK and is available to anyone to buy to add their support.

The money raised through the partnership between BBC Children in Need and Girlguiding will be split equally between the two organisations and will go on to make a difference to young lives across the UK.

England football players Millie Bright, 27, and Rachel Daly, 28, are leading by example with their own Act Your Age challenges. The Lionesses challenged themselves to perform 55 keepie-uppies to raise funds for the charities. Millie said:

“We are delighted to be supporting BBC Children in Need and Girlguiding to help raise funds to help support children and young people and hope to encourage others across the nation to do the same.”

“We are incredibly excited and proud to be partnering with BBC Children in Need in its milestone 40th year. This year has been challenging for everyone, especially our children and young people, and it’s imperative now, more than ever that we do everything we can to ensure that they are not forgotten and have access to the support they need to thrive.”

Pudsey Bear first appeared in 1985 and instantly transformed the Children in Need brand. He was created by BBC designer Joanna Ball, and took his name from her home town.