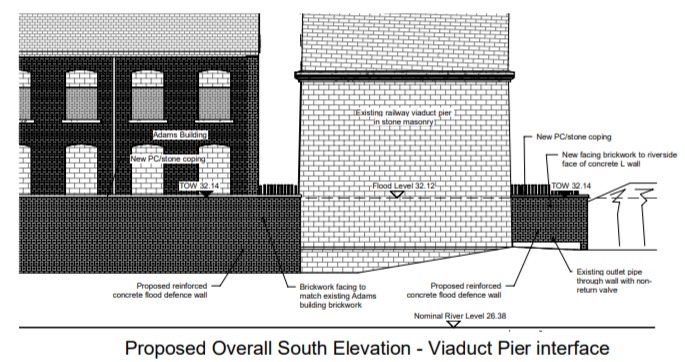 Plans for flood defences at the historic Kirkstall Railway Viaduct have been submitted by Leeds City Council.

The proposals for the Grade II Listed structure form part of Phase 2 of the multi-million pound Leeds Flood Alleviation Scheme to protect the area following the floods of Boxing Day 2015.

Proposed works are centred on a single pier of the 21-arch structure, immediately north of the River Aire, next to the Adams building.

A new flood wall would be built almost up to the viaduct pier, leaving a 10mm gap. A hydrophilic seal would be inserted in this gap to prevent
seepage.

A design statement submitted with the planning application says:

“As a landmark feature in western Leeds, the Kirkstall Railway Viaduct provides substantial communal value to locals and visitors to the area.

“The setting of Kirkstall Railway Viaduct makes an overall positive
contribution to its significance, however some minor elements such as the existing flood defence structure make a negative contribution.”

The Leeds Flood Alleviation Scheme aims to prevent a repeat of the flooding that affected more than 3,000 homes and businesses at Christmas 2015.

Work has begun on the second phase, which is designed to give a one-in-200-year level of protection against the threat of flooding along the Kirkstall corridor and into the city centre.

And it will include building new walls and embankments, the removal of obstructions along the river to reduce water levels, the creation of new woodland areas, and creating a water storage area that releases water only when safe.

Kirkstall Railway Viaduct opened in 1849 as part of the Leeds and Thirsk Line and was designed by notable engineer Thomas Grainger.