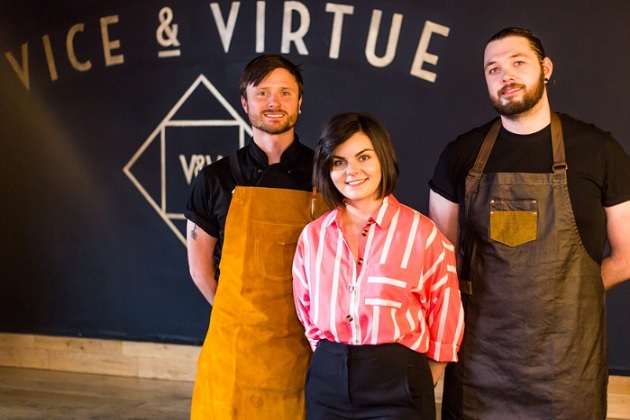 Restaurateurs and award-winning chefs Laura MacLeod and Luke Downing are launching a new eaterie in Pudsey.

Feed, the fourth member of the Vice and Virtue family, is based at the former Howard’s Bistro site on Richardshaw Lane.

Feed will serve breakfast, artsy coffees and lunch by day and have an evening menu that will change daily. The aim is to deliver a modern take on what chefs like to cook, the quality of fine dining, without any of the fuss.

Local and national craft ales will be a focus, as well as carefully curated cocktails and wine list. Feed will have a laid back and relaxed vibe that everyone can enjoy day or night.

“We’re bringing something completely new to Pudsey – something that we, as a team, are crazy passionate about and hope that the locals (and non-locals) are too. It’ll be a permanent fixture in people’s social schedules.”

“I wanted to work in the area because I feel like there’s something missing. I visit my brother in Pudsey and we’re at a loose end after a couple of hours. Feed will tick a lot of boxes, hipster coffees, craft ales, some refined food, some fast food.

“We’ll cater for everyone, and of course we’re considering the increase in vegetarian and veganism. Something I’m passionate about is bringing creative food and drink to the area.”

Downing will take a more operational role in this venture and has handed the kitchen to well renowned Leeds chef, Jono Hawthorne. His training began at the Box Tree, Ilkley, and he has since worked in 2 and 3 Michelin starred restaurants around the world including Noma, Denmark, and Australia’s most awarded restaurant, Quay.

Dough Bistro was the beginning of the Vice and Virtue business. Existing sites include Nineteen at Leeds Golf Centre, Aperitivo in West Park and Vice and Virtue. Recent successes include 2018 Oliver Awards for best chef, best service and best overall and 2017’s best fine dining. The group have also taken home best bar and best cocktail from 2018’s Cocktails in the City. Vice and Virtue were also the only new entry from Leeds to the Good Food Guide in 2017.

Feed will open its doors mid August. Reservations can be made via their webpage.