Councillors have delayed a decision on major plans for converting landmark Stonebridge Mills into homes.

Developer Stonebridge Mills Ltd are hoping councillors will support scaled-back proposals to convert nine existing buildings into 30 homes, and build 82 new houses on the decaying mill site off Stonebridge Lane in Farnley. Some of the buildings on the historic site are Grade II Listed.

But at the south and west plans panel there was a difference of opinion between the developer and the district valuer over provision of affordable housing on the site. The valuer felt there was room for four units, while developer argued it wasn’t financially viable. 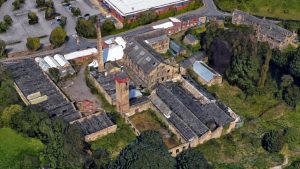 Councillors on the panel felt it would be good to hear both sides of the story at the next panel meeting. They also felt that there could be some design tweaks to improve some of the homes.

Members were recommended by council planning officers to approve in principle plans for 112 properties on the site, which dates back to the 18th century.

Council planning officers will now renegotiate some aspects of the plans with the developers. The proposals are expected to come back before next month’s plans panel for a final decision.

Proposals include the loss of 15 buildings and the retention of nine on the site. But the council’s report says most of the buildings proposed for demolition are relatively small and in a serious state of disrepair and adds the most conspicuous, larger, landmark and visible buildings within the site are proposed for conversion.

Local councillors Ann and David Blackburn (Green, Farnley & Wortley) have objected to the latest proposals, along with five further objections from residents. Concerns include the impact on wildlife and the natural environment and the loss of historic buildings on a sensitive site.

“The proposal offers an opportunity for the site and its Listed buildings to be preserved and brought into use after decades of being vacant and dereliction.

“It is considered the proposal has been devised to retain the best historic assets on site, while providing the opportunity to develop part of the site with new build properties to generate the necessary funds for the restoration works.

“The proposal retains the landmark chimneys, part of the mill pond and offers extensive areas of open space and landscaping, including the characterful cobbled streets. It is considered the proposal will create a unique new neighbourhood and quality, generous-sized accommodation, which respects the industrial heritage of the site and preserves the best areas of Nature Conservation and trees.”

The four Listed buildings on the site are on the Leeds City Council’s city-wide ‘Buildings at Risk’ register.