Our latest community news cafe proved VERY popular – with residents from Armley, Bramley, Stanningley and Wortley all coming along.

The cafe, held at Bramley’s Costa Coffee, was a chance for readers to meet editor John Baron, tell their stories or volunteer to contribute to the Dispatch. 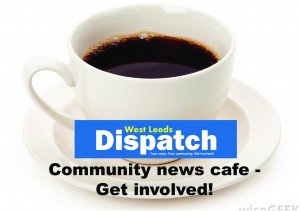 It’s inspiring how much is going on in our communities!

A Stanningley resident came to see us about problems with noise and problems with heavy goods vehicles during the early hours at a local scrapyard. There are also concerns about noise and dust coming from the site.

Apparently there’s a chance of housing being built there, which locals are keen to see go ahead. We’ll follow this story as it progresses.

We also heard from Denise Ramsden about a need for new Guides leaders (and members) across West Leeds. She also told us about the fabulous work going on with young people at Christ Church in Armley. Look out for reports on these soon!

We were Tweeted by Pudsey resident Kat Brown during the news cafe. She was concerned about rubbish and dog dirt off Kent Road and Marlowe Close in Pudsey.

@WLDispatch Do you know the Twitter handles of our councillors in Pudsey? Disgusted by the state of this. pic.twitter.com/wJLVHKkvIy

We put Kat in touch with her local councillor and will monitor the situation.

We also heard from another resident about a new fundraising appeal at a Bramley church, which we’re looking forward to receiving more details on.

It was great to meet Bramley’s Debby Dean, who is volunteering to write for us. Debby has connections with the Sassy Divas group, Bramley Baths, Bramley Lawn and Armley Junktion, among others. We’re looking forward to receiving her reports!

And it was good to meet Rob Cook, communications co-ordinator at Bramley Elderly Action. We’re looking at the possibility of working with BEA on a photography project – and receiving reports on all the activites and great work that goes on there.

We also received an offer from one resident to sell advertising for the Dispatch!

It was great meeting everyone. The truth is we really couldn’t keep going without your support…

They could be about life on your allotment, or community life in general.

Don’t worry if your writing isn’t great, we can help with that and offer you full support.

Your reports could also feature photographs, or even video or audio if you’re really brave!

You may feel you want to report from public meetings, like Bramley Forum, or local council meetings, which is great – we’d love to hear from you, too!

Our aim is to reflect local life in West Leeds – fancy getting involved? Email us at news@westleedsdispatch.com or post in the comments section below.

We’ll also organise another community news cafe soon. One reader’s suggested we hold it in Farnley next time (we’ve held all our cafes in Bramley so far) – anyone got any other suggestions?