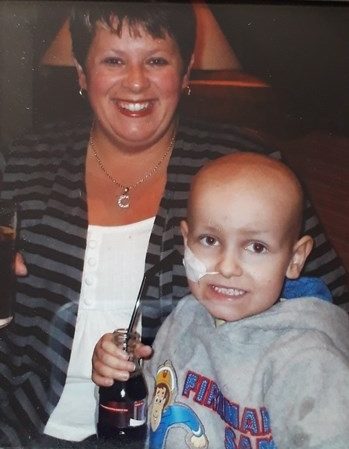 A mother of a young Armley boy who passed away aged five after a battle with Neuroblastoma is taking part in a canal walk on what would have been his 13th birthday, writes Keely Bannister.

Carly Hudson, aged 46, will be joined by 35 other ladies for the charity walk which starts at Saltaire and travels along the canal into Leeds to raise money for children’s cancer charity Candlelighters.

“Along with 35 ladies I am walking along the canal from Saltaire into Leeds, which is exactly 13 miles. I’m doing it in memory of my son Thomas Daniel Mark Hudson, who sadly passed away aged five years old from Neuroblastoma.

“I am doing the memory walk because I wanted to do something on Thomas’s 13th birthday. So what better than walking with my friends and family all ladies in pink Candlelighters t-shirts raising money and raising awareness of children’s cancer?

“We will be stopping off for lunch, drinks and a toilet break at Rodley Nature Reserve, where we have a memorial bench, then off into Leeds to the finish.

“After that we will be going straight to The Commercial pub in Armley. The landlady and a few ladies from the pub who are joining us on the walk, for well-deserved drinks. There will be fundraising continuing in the pub with raffles. Everyone is welcome to join us.”

Thomas, who lived with his mum Carly and dad Steve Hudson, 48, in Upper Armley, suffered from the second most common solid tumour in childhood, with the cancer affecting almost 100 children a year in the UK.

Neuroblastoma can occur anywhere in the body, but it most often occurs in one of the adrenal glands, in the abdomen. Neuroblastoma has one of the lowest survival rates of all childhood cancers, with only 67% of patients surviving to five years.

An only child, Thomas attended nursery at Whingate Primary School and was supposed to start at the school proper in September 2011 but was too ill to take his place.

“He used to love pretending he was Bob the Builder, then he moved on to Fireman Sam. He loved fire engines!

“Thomas had a year on treatment starting with chemotherapy, then surgery to remove the tumour in his tummy. He then had high dose chemotherapy and stem cell transplant before he went through radiotherapy and antibody treatment.

“At the beginning of January 2012, he relapsed after the cancer came back, so he had more chemotherapy, but he ended up in intensive care. We were told there was no more treatment available as the Cancer had spread so we took Thomas home.

“Candlelighters children’s cancer charity paid for us to go to their caravan at Primrose Valley for a week away but Thomas deteriorated during the week and we ended up in Martin House children’s hospice where Thomas passed away on 20th April  2012. All the time throughout our cancer journey Candlelighters supported us and still do now with different things.”

Established in 1976, Candlelighters is a charity formed and run by parents of children who have or have had cancer, ex-patients and the medical staff who treat them. Based in Yorkshire, Candlelighters provides essential services and support to children with cancer and their families.

So far, the walk has raised over £1,175 for Candlelighters, with Carly wishing to offer her thanks to everyone who has donated so far.