Can you help raise £2,500 for a specialist bed for little Oliver? 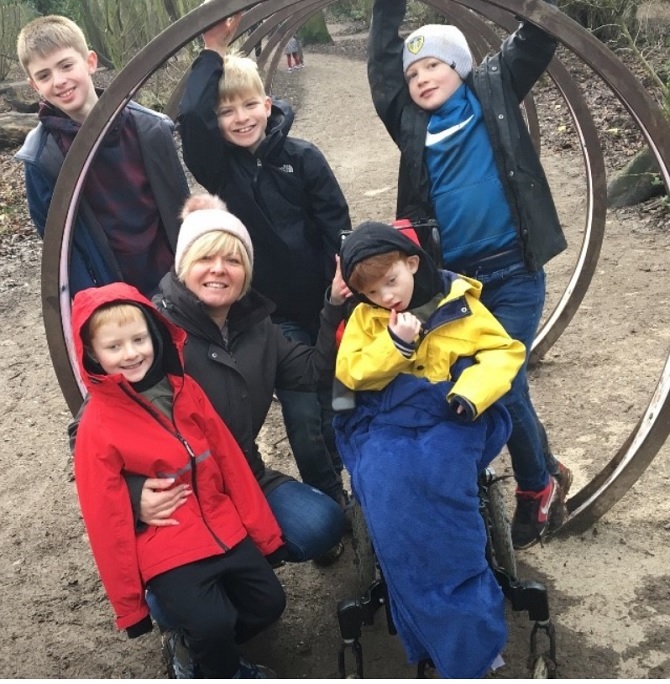 When Oliver Rooney’s four brothers stay with their dad for the weekend they are heart-broken to leave him behind.

But the eight-year-old with profound and complex needs is forced to miss out because he doesn’t have a specialist bed to keep him out of danger.

Oliver has Wolf Hirschhorn Syndrome, an extremely rare chromosomal disorder which means he has physical and learning delays and has absolutely no awareness of danger, so he needs to be constantly supervised.

A specialist high-sided bed protects Oliver through the night at his Bramley home, but without a specialist travel version it’s not safe for him to join his twin Jak, Thomas, nine, Joseph, 11 and Samuel, 12, to stay with their dad, John, or enjoy sleepovers at their grandparents or holidays.

Now Newlife – the Charity for Disabled Children is urgently calling on community to help them raise £2,510 to fund the specialist travel bed for Oliver – and an anonymous donor has already pledged to match all donations Newlife receives pound for pound.

“It’s heart-breaking that Oliver has to miss out on so much, but at night time he’s often awake for hours in the middle of the night. Without a specialist bed with high sides he would be in constant danger.

“Oliver is like a one year old in an eight-year-olds body. Everything around him has to be safety proofed all the time. He has no understanding of what’s dangerous, so there are so ornaments or lamps in our home and the TV is far out of reach, high up on a wall. It’s exhausting to always be thinking a step ahead and I can’t take my eyes off him for a moment.

“Even going outside means Oliver has to use a wheelchair because his joints are hyper mobile and he gets very tired very easily and he’ll just decide to sit down anywhere, even the middle of the road, and not move.

“When he was younger we could go away for a break and use a travel cot, but he’s far too big now. We have even tried strapping in him in to a reclined buggy so he can stay at his dad’s for the weekend, but that’s not safe for him.

“A specialist bed will mean Oliver and his brothers can do everything together, rather than him having to stay at home with me or at my parent’s home whilst I visit other family, which I haven’t been able to do in four years. It’s so important as it will give Oliver as normal a life as possible and mean so much to his brothers to have him with them. It also means I can sleep and relax knowing he is safe away from home.”

“Every child deserves the chance to be included in everything family life has to offer. Missing out on so much due to the simple lack of equipment is heart-breaking.

“Unfortunately, as much as we want to help Oliver and his family, we simply don’t have the funds to buy the equipment right now. We are desperately appealing to the local community for help to raise the money so Oliver can have the specialist travel bed he urgently needs.”

Anyone able to help Oliver should urgently contact Newlife on 01543 431 444, visit the website at www.newlife.support/HelpOliver or email fundraise@newlifecharity.co.uk. You can also text NEWLIFE OLIVER to 70500 to give £10 to Oliver’s appeal. Newlife will receive 100% of your donation. Texts cost £10 plus 1 message at your standard network rate. Always get the bill payers permission.

Oliver is just one of 22 children in Yorkshire and the Humber on the waiting list and in desperate need of specialist disability equipment costing a total of £22,038.

Money raised above the amount needed for Oliver’s bed will be used to help other disabled and terminally ill children in need.

The Dispatch reported yesterday how campaigners fighting to save the TV Harrison ground in Wortley were holding a charity football game with Armley Christ Church FC to raise money for an all-terrain buggy for Oliver.

The special match will be played at the TV Harrison Ground, off Oldfield Lane, on 8 March at 2pm.