Bramley Buffaloes beat All Blacks ahead of busy week 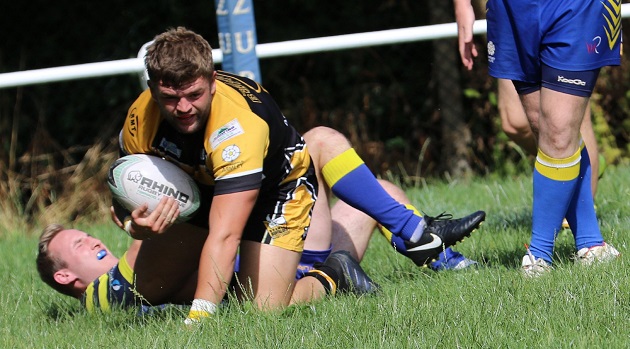 After the disappointment of a fortnight ago when we couldn’t go to East Hull, the coaches and Brad Wilson worked hard to ensure that we had a team to travel to York to tackle New Earswick All Blacks, writes Martyn Cheney.

The team saw Kenny Parker returning to the club for the first time in a couple of years, and the return of Craig Brown from injury.

By way of a change, the game started brightly for the Buffaloes when the All Blacks player dropped the ball and the away team were on the attack from the resulting scrum.

On the fourth play, hooker Jake Barnett spotted a gap in the defensive line and dove through the gap and players’ legs to score the opening try of the afternoon, with Connor McGill, playing in the centre, adding the conversion. Buffaloes lead 0-6.

In the 17th minute from a scrum around the halfway line, Jack Wilson kicked the ball over the heads of the defenders and full back Aaron Henry beat his opposing number to touch the ball down for the Buffaloes’ second try of the afternoon, again converted by McGill, doubling the lead to 0-12.

On 28 minutes the All Blacks opened their scoring account, when the scooted through some sleeping defence from the play the ball for a converted try, halving the lead to 6-12.

Both teams were trying all their set moves and plays, trying to break the other down and score more points but the defences were resolute and the referee’s whistle was strong.

Four minutes from the break, debutant Kenny Parker, allegedly struck a New Earswick Player and the referee dispatched him to the sin-bin.

The teams went into the break with the away team leading 6-12.

From the kick-off, normal service resumed and the Buffaloes allowed the ball to go into touch and New Earswick had the ball back 10 metres from the opposition line. On the last tackle the All Blacks sneaked over the line avoiding the defence for a converted try, levelling the scores at 12 all.

In the 45th minute, the Buffaloes were in front again when winger, Rob Brown, sprinted away to score an unconverted try, making the score 12-16.

Nine minutes later and New Earswick took the lead, when the acting half-back dove through the defender’s legs for a converted try, making the score 18-16.

The Buffaloes were spurred on by falling behind for the first time in the game and came on the attack.

In the 65th minute, Barnett again saw a gap in the defensive line and drove his way through the defender’s legs for his second try of the afternoon. However, there was no conversion added, giving the Buffaloes the lead again 18-20.

Five minutes later, and the Buffaloes were in again. Quick passing from dummy half lead to Tom Langton crashing over the line for the fifth Buffaloes’ try of the afternoon, with the conversion floating wide of the posts, extending the lead to 18-24.

On 72 minutes Henry crossed the line for his second of the the afternoon, with a jinking run on the last tackle, showing composure to beat the defenders and cross under posts. He converted his own try, making the score 18-30.

In the final minute of normal time Xavier Martin picked up the ball and raced away from the defenders who were protesting at the referee for a knock on, Martin put the ball down for an unconverted try. Stretching the lead to 18-34.

The game continued on into injury time with both teams looking to gain an advantage and add to their scoring tally. However, this wasn’t to be, and the referee blew for time with the score at New Earswick All Blacks 18 Bramley Buffaloes 34.

That was the last game of the season for New Earswick All Black, while the Buffaloes have a busy week, with two games to come, both at home. First up is Siddal Academy on Wednesday evening, kicking off at 7pm, and then Batley Boys on Saturday at 2.30pm.

The Buffaloes Play out of Bramley Phoenix RFC, The Warrels, off Grosmont Terrace, Bramley, LS13 3NY. and entry is £2 for an adult.