Farsley Celtic fought back from a goal down to earn a crucial point against Ashton United on a warm evening at Hurst Cross, writes Thomas Ritchie.

Max Cartwright gave Ashton the lead midway through the second half, but Farsley hit back ten minutes later through a James Walshaw penalty, although Ashton hit the woodwork late on as they piled the pressure on the visitors.

A cagey start saw Farsley captain Danny Ellis get an early yellow card before he almost edged The Celts in front, glancing a Richard Marshall corner just wide of the upright.

James Walshaw also had a fantastic chance to open the scoring for Farsley as a superb Adam Priestley cross picked him out at the back post, however Walshaw’s effort was bundled behind for a corner.

Ashton’s best chance of the first half came moments later as a long ball from Aaron Chalmers found Matthew Chadwick in space in the box, however sensing glory he snatched at his effort and smashed it wide.

Farsley continued to create opportunities as James Walshaw’s flick on allowed Adam Priestley to race through on goal, however he struck his effort into the side netting.

Ashton United goalkeeper David Carnell was forced into action for the first time on the hour as Nathan Cartman got behind the defence before his effort from a tight angle was parried to safety by Carnell.

The home side then started to pile on the pressure and would have taken the lead but for a sensational save. Matthew Chadwick whipped in a low cross from the right to the near post where Jack Dyche turned goalward only for Graeme McKibbin to make a fantastic save to keep the score at 0-0.

Midway through the half the Ashton pressure told as John Pritchard’s corner dropped to Max Cartwright 12 yards from goal, and he lashed home to give Ashton the lead.

Graeme McKibbin was forced into action once more minutes later to keep the visitors in the game, as he turned Chadwick’s half-volley from the edge of the area around the post.

Farsley then got back in the game against the run of play, as a counter attack down the right flank saw Kurt Harris felled in the box, with James Walshaw stepping up to slot home the penalty for his third goal in the opening two games.

The game then opened up with both sides desperately searching for the winner. Farsley came inches away from snatching victory as from a Luke Parkin corner Adam Clayton saw his header blocked on the line before James Pollard’s follow up effort drifted just wide with the goalkeeper stranded.

Ashton then went ploughing forward with captain Mark Lees feeding Liam Tomsett who was denied by a superb tackle from substitute James Pollard in the area.

Isaac Baldwin almost produced a sensational goal to give Farsley the lead early on in injury time, as he picked the ball up 30 yards from goal and let fly, with his effort flying just over the crossbar.

However, Farsley were left hanging on as Ashton threatened to take all three points with the final action.

A Pritchard corner from the right caused havoc with an initial effort being superbly tipped on to the crossbar by McKibbin before the rebound also struck the bar.

Farsley failed to clear and the ball fell to Chalmers on the edge of the box with his drive being held by McKibbin in what was the final action of the game. 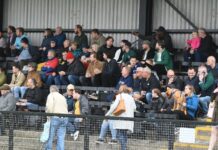 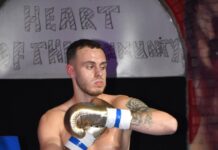 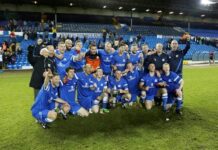