Leeds City Council have been successful in securing a £15,000 government loan to help develop and set up a Business Improvement District (BID) covering the town centre including Armley Town Street, writes Keely Bannister.

Delighted that #Armley has been chosen for the next round of Business Improvement District (BID) funding which will be spent on improvements to Town Street! @WLDispatch @ArmleyGoodStuff 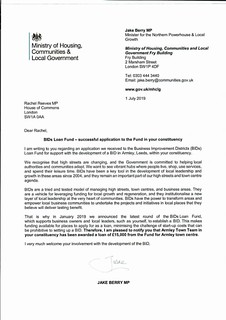 The Minister for the Northern Powerhouse and Local Growth, Jake Berry, announced the award of the loan in a letter to Rachel Reeves, writing:

“I am writing to you regarding an application we received to the Business Improvement Districts (BIDs) Loan Fund for the support with the development of a BID in Armley, Leeds, within your constituency.

“We recognise that high streets are changing, and the Government is committed to helping local authorities and communities adapt. We want to see vibrant hubs where people live, shop, use services and spend their leisure time. BIDs have been a keen tool in the development of local leadership and growth in these areas since 2004, and they remain an important part of our high streets and town centre agenda.

“BIDs are a tried and tested model of managing high streets, town centres, and business areas. They are a vehicle for leveraging funding for local growth and regeneration, and they institutionalise a new layer of local leadership at the very heart of communities. BIDs have the power to transform areas and empower local business communities to undertake the projects and initiatives in local places that they believe will deliver lasting benefit.

“This is why in January 2019 we announced the latest round of the BIDs loan fund, which supports business owners and local leaders, such as yourself, to establish a BID.

“This makes funding available for places to apply for as a loan, minimising the challenge of start-up costs that can be prohibitive to setting up a BID. Therefore I am pleased to notify you that Armley Town Team in your constituency has been awarded a loan of £15,000 from the fund for Armley Town Centre.”

What is a BID?

A BID is an extra levy, on top of business rates, that is paid for by business rate payers and used to benefit businesses within a specified area. The levy should add to and enhance, rather than replace or distract, current provisions provided to the area by the local authority.

BIDs have been the subject of some negativity though. The Leeds BID has previously attracted criticism over workers’ attitudes to the homeless.

Campaigners advocating a “no” vote to the Morley BID claim that small businesses are facing pressure to vote yes and that businesses shouldn’t have to pay extra when business rates should finance any improvements required.

Rachel Reeves’s Facebook announcement of the BID has also attracted a mixed reaction, with some people questioning how the loan will be paid back, whether a BID would make a positive difference and one person simply leaving the comment “Absolute joke”.

The BID award comes just a few months after Leeds City Council chose Armley Town Street to be the subject of a separate application for a slice of Government grant funding aimed at helping high streets “facing significant challenges”.

The Dispatch will bring you more news on Armley developments as they are announced. Why not make sure you are one of the first to hear it by signing up to our daily newsletter?