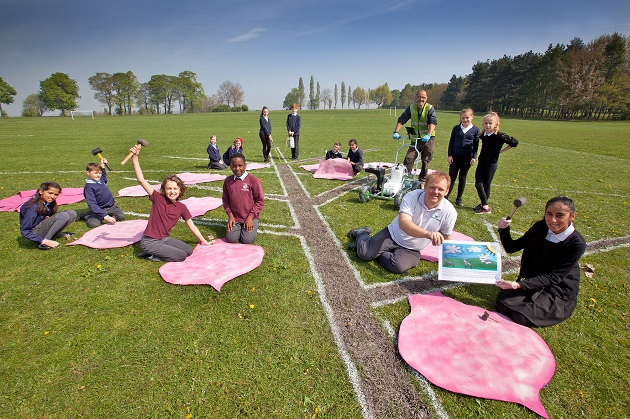 The artwork at Gotts Park features the winning designs from three primary schools in Leeds, and includes a school pupil’s drawing inspired by the Brownlee Brothers travelling down the Bradford Leeds Cycle Superhighway by bike in the sunshine.

The design also features owls from the city’s coat-of-arms on a blossom tree in the background.

The project is a collaboration between Andrew Wood from Fields of Vision, 2017 winner of the Tour de Yorkshire land art competition, and the West Yorkshire Combined Authority’s £60m CityConnect programme aimed at encouraging more people to travel by bike or on foot.

The CityConnect team ran a competition to find a design to celebrate the local area and cycling with pupils from three of its Bike Friendly Schools – Castleton, Christchurch Upper Armley and Holy Family.

On Sunday (5 May) the final stage of the Tour de Yorkshire, “The Yorkshire Classic”, will pass alongside CityConnect’s Bradford Leeds Cycle Superhighway, as the peloton travels along Stanningley Road, past Gotts Park on the final stretch into Leeds.

It is hoped the artwork, which showcases the creativity and imagination of local school children and how cycling inspires them, will feature in TV helicopter footage of the race seen by millions of people across the globe as the final stage passes through the area on Sunday.

“We’re all very excited to be playing such our part in welcoming this year’s Tour de Yorkshire.

“Everyone at the school is delighted to be involved in this land art project and I’m sure our pupils will remember it for a long time to come.”

Graham Jones is Inclusion Support Manager at Castleton Primary School, where every year five and six pupil can ride a bike.

“We are both proud and pleased the West Yorkshire Combined Authority’s CityConnect team is helping put our community on the map,” he said.

“What a great opportunity for local school children to potentially have their artwork feature on race coverage, seen by millions of people across the world – I’m sure all eyes will be on the TV in Armley this weekend.

“From boosting physical activity to instilling good travel habits that last a life time, we know encouraging more of our pupils to cycle and walk brings real benefits.

“Taking part in CityConnect’s Bike Friendly Schools scheme is a great opportunity to get more of our pupils cycling.”

The Bradford Leeds Cycle Superhighway, which stretches 23km, has been used for nearly a million trips (953,595 up until the end of March 2019, according to City Connect).