Restoration work on the former Mike’s Carpets building off Stanningley Road should be finished ‘by the end of the month’.

The building – dubbed ‘the gateway to Armley’ – is the final piece of the jigsaw in the £1 million Armley Town Heritage Restoration Scheme, funded by the Heritage Lottery.

Forum chairman Cllr Jim McKenna said efforts to get the grade II listed building, which is under private ownership, restored have taken the best part of 25 years.

He said councillors would be meeting with the building’s owners to see what the long-term plans for the building are. It’s currently used as a carpet shop.

Its completion marks the end of the heritage initiative in Armley, which has also seen new shopfronts, paving and railings installed in the area. 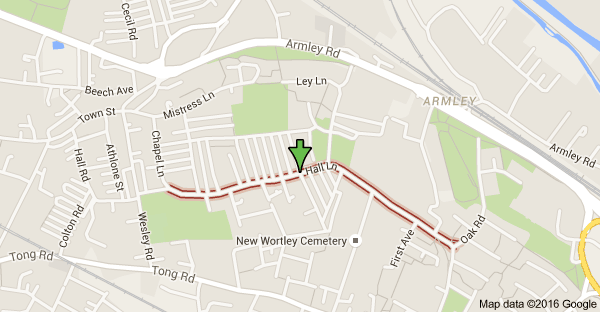 Apparently there’s been a couple of serious accidents in the past fortnight, including one car which went into the wall of a property.

“It’s turning into a grand prix training track,” said one local resident, who added drivers were often speeding at 60mph in a 20mph zone. She added:

“It’s only by the grace of God that there hasn’t been a fatality so far.”

Local police said they would visit local residents affected by the issue and start to investigate the problems.

3. Hate crime in Armley is ‘under-reported’

His claims were supported by Inspector Simon Jessup, of West Yorkshire Police, who said hate crime was undoubtedly under-reported in Armley and encouraged people to come forward. He said:

“There is an underbelly of people in any community  who behave badly in terms of race and sexuality. We want to undestand what is actually happening in communities, not just what is being reported to us. We want to tackle some of the problems before they start. We won’t tolerate it.”

He asked Armley residents to report any incidences of hate crime – including in  local shops or graffitti – to police.

Problems with the cycle superhighway continue to be raised at Armley Forum meetings.

One older couple said they’d recently seen 16 cyclists in a 90-minute period use the pavement on Stanningley Road instead of the new cycle superhighway.

Issues with cyclists going up the superhighway the wrong way were also raised with the police and local councillors.

The meeting was livestreamed for the first time on Facebook, with a total of 66 people watching. It was the first time this had been tried in the city by the council, and despite some teething problems with sound, it was well received.