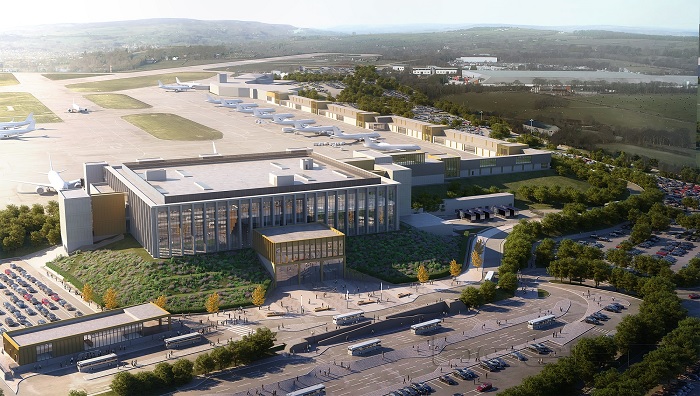 A new document has revealed Leeds Bradford Airport may not be able to demolish its old terminal building once a replacement is built, as it contains much of the site’s crucial infrastructure.

As part of a Leeds City Council plans panel’s in-principle acceptance of the £150m rebuild last month, members wanted the ageing terminal building to be demolished as soon as possible once the new one was built.

But a document set to go before the panel next week claims the airport is unable to do this, as it currently contains the air traffic control tower, fire station and computer systems.

Leeds City Council planning officers say these are needed for the airport to maintain its aerodrome licence, but adds that the airport has committed to creating a “masterplan” to get rid of the site in the longer term.

It also said the airport wanted to introduce extended flight times before the building of the new terminal was finished, despite the insistence of plans panel members to only allow extra flights once the new facility was built.

The report, set to go before the panel next Thursday, said:

“The existing terminal building houses some of the Airports critical operations and will need to remain operational, as they are not included in the new terminal building and are integral in order for LBA to operate safely and maintain its aerodrome licence.”

It listed the airport’s air traffic control tower, fire station; and IT, communications, security, safety and mechanical infrastructure that would still serve the airport until such a masterplan was produced.

The airport’s management offices are also included in the terminal building, as well as Jet2’s staff offices.

It added that the airport would still be prepared to commit to the demolition of the check in Hall B, the Jet2 baggage hall and passenger handling facilities within six months of the new terminal’s opening – but this makes up only a fifth of the original terminal building.

“The remainder of the building was constructed as a single building unit, making it difficult for partial demolition, whilst retaining the above operations, utilities and uses.

“However, in order to address any future concerns, the applicant has committed to work closely with the City Council on a master planning exercise regarding the existing terminal building and the surrounding part of LBA’s estate which may include a programme for the progressive de-commissioning and demolition for the remainder of the existing terminal.”

The airport also wants permission to increase flight times before the completion of the new terminal, despite councillors’ insistence that the new times only be introduced once it had been finished. Members of the panel had been concerned that granting extended flight times straight away could lead to the airport taking advantage of them without building the new eco-friendly terminal.

As part of the building plans, new flight time controls were included to extend the daytime flight period, as well as a likely increase from five to 17 flights between 6am and 7am.

The airport now appears to have offered a compromise to the council, agreeing to only introduce the new flight times one year into the two year building project.

“The applicant recognise and respect members request that they do not wish for the new flight controls to be introduce without the guarantee of the delivery of the benefits of the new terminal.

“However, it is necessary for the flight regime to be introduced during the construction of the new terminal, given that the construction is expected to take 24 months and the airport needs to negotiate and confirm new route contracts in advance of opening.

“Developing and negotiating new routes is a complex process including evaluation of new routes, allocation of potential aircraft, marketing of routes and lead time for the new route to be marketed and on sale before it becomes operational. It is therefore important for the applicant to have some flexibility in the delivery of the new routes, as the replacement terminal is under construction.”

Council planning officers have recommended the proposals be accepted, provided the applicant was willing to fund off-site tree planting worth £30,000.

The planning officer’s report also recommends that a raft of further planning conditions attached to the development are approved.

“We thank the Plans Panel for all their diligent considerations and we are delighted with their support in principle.

“If fully approved, our scheme would enable us to become a net zero airport, delivering a much-improved passenger experience and creating thousands of jobs, helping to support our region’s recovery.

“We look forward to working with officers and hearing the final decision of the committee in due course.”

Members of the panel are set to discuss the report on Thursday, March 11.

Two hundred and forty six University of Leeds staff and postgraduate researchers have signed an open letter calling on the government to take responsibility for the airport’s planning application, which was given conditional approval by Leeds City Council on 11 February.

The signatories, including 46 professors and associate professors, say that expanding LBA’s passenger numbers by 75% exceeds the maximum rate of growth that the Climate Change Committee considers compatible with the UK’s legally adopted net-zero target.

They warn that expansion would make it much more difficult – and more costly – for the UK to achieve its climate targets and would require reductions in passenger numbers elsewhere in the UK.

Bramley-based Paul Chatterton, Professor of Urban Futures at the University of Leeds, said:

“On 24th February, Boris Johnson chaired a United Nations Security Council session and rightly told world leaders that climate change is a threat to our security. This is the context in which the UK’s Committee on Climate Change recently told the government there should be no net expansion of UK airport capacity unless the aviation sector is on track to sufficiently outperform its net emissions trajectory. Aviation very clearly is not ‘on track’ – its trajectory is one of increasing, not decreasing, greenhouse gas emissions.”

“The following day, in response to pressure to reverse its outline approval, Leeds City Council said ‘Current government policy points to these emissions being something that should be primarily tackled at a national level’ and we agree. This is why the Secretary of State simply must call in this decision so the impact on the climate can be properly assessed.”

“It is greatly encouraging to see that so many staff and postgraduate researchers from the University of Leeds have added their voices to request that the airport’s expansion application be called in.

“The Secretary of State Robert Jenrick has the power to intervene in planning matters that conflict with national policies or that cause substantial controversy. Given the UK’s 2050 net-zero target, and the international embarrassment caused by approving new airports and new coal mines in the year we are hosting COP26, it is critical he should now exercise that power.”

The open letter ends by saying: “In the year that the UK is hosting the COP26 conference, it is vital that we show leadership on climate change and take the necessary actions to secure a safe, zero-carbon future. We therefore urge you [Robert Jenrick] to call in this application so that the issues highlighted are considered in light of national and international climate targets and associated guidance.”

The Guardian quotes a spokesperson from the Department for Local Communities and Government saying the application will be referred to the secretary of state because of the scale of the proposed development and its green belt location, should Leeds City Council approve the plans in full.

But barrister Estelle Dehon, who is representing the campaigners, said that did not specifically take into account their wider climate concerns and added:

“[The government’s] response has been to put off any decision about call-in, because at some future point the council is obliged to refer the green belt impact to Mr Jenrick so he can consider call-in on that basis. This delay is unjustified. And green belt referral is no guarantee that the decision will be called in.”

Supporters of the project say the airport expansion would boost the local economy by hundreds of millions of pounds, update the current outdated facilities and support thousands of new jobs.

The detailed proposals include a new three-storey terminal at the eastern edge of the runway. The airport wants the “state of the art” terminal, as well as new parking and access facilities, to be open by 2023. LBA hopes the number of annual flights could increase from four million to seven million in the coming decades.