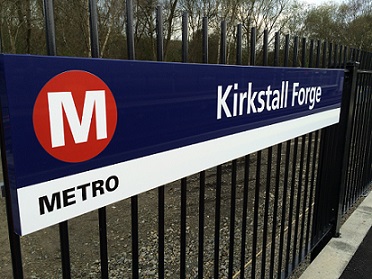 Northern Rail has announced that services from Kirkstall Forge station will now run half hourly – which will come as very welcome news to West Leeds residents and workers! writes Jill Buckley.

The doubling of the service at the station comes as Northern has announced a new network-wide timetable due to be introduced from Sunday 20 May.

The announbcement follows numerous complaints by commuters and campaigns by MPs Rachel Reeves and Stuart Andrew.

“It’s fantastic news that more trains will be stopping at Kirkstall Forge. I’ve campaigned for this for months and I am delighted that Northern will soon be operating a new half-hourly service. The extra trains will make it easier for thousands of people to get around the city and help unlock the full potential of Kirkstall Forge.”

“This announcement is great news as the number of passengers using these two stations has been incredible since they first opened. Going from an hourly service to half hourly service will be of great benefit to many of my constituents.

“Tackling congestion on our roads and improving transport is something I have long campaigned on and this is a step in the right direction to helping local people have other options for travel other than using their cars.”

The station, which opened in 2015, has proved to be much more popular than anticipated; 20,200 journeys from Kirkstall Forge to Leeds were forecast for the first year of operation with 21,400 being recorded in just the first five months of opening.

Paul Barnfield is the Regional Director at Northern Rail. He said:

“We have been talking to partners for some time regarding putting a better service into this increasingly important hub. This wasn’t easy however, due to the sheer volume of rail traffic that goes in and out of the west end of Leeds station.

“We are delighted to say that our combined efforts have prevailed and we will now be able to supply the station with two trains an hour in either direction from May this year. This is terrific news and will help the site, and indeed the whole area, to reach its full potential.

“This project has been a really good example of partnership working in quite challenging circumstances to quickly deliver an outcome that will link more people with opportunities right across our region.”

Unfortunately the changes will not benefit everyone as yet. Richard Fairlie works for Zenith at Kirkstall Forge. He commutes daily from Steeton and Silsden and said:

“As a commuter travelling from Steeton & Silsden to Kirkstall Forge every weekday, the increase in train services will only affect me if the services that stop go to Skipton.

“Currently the trains that stop hourly mainly go from Leeds to Ikley, which are not helpful for anyone travelling to Shipley and beyond; one goes to Bradford Foster square but this is still not ideal for anyone travelling to Saltaire and beyond.
For me I would like to see more trains travelling from Kirkstall Forge directly to Skipton during peak times (and even throughout the day); whether the train will be from Bradford, Skipton or Ilkley is not confirmed on the Northern rail site.”

“Increased trains to every half an hour will be fantastic and will greatly improve the flexibility of our working day.”